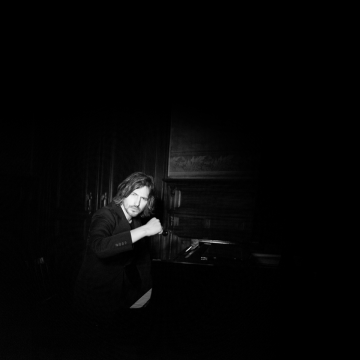 Since debut album in 2009/The Jolllity Of My Boon Companion” @ Munich Records LYENN has been touring the world with The Mark Lanegan Band and played with Music Legends like Marc Ribot, Shazad Ismaily (Bonnie P Billy), Sam Amidon, Shelly Hirsch, Gyda Valtysdottir (MUM), as well as leading the jazz rock trio DANS DANS, with his eclectic Bass!
And now we are so Massive Fucking Proud, with the New Album ADRIFT, LYENN returns to his Royal Family where it all started 10 years ago! LYENN is COMING HOME!

What is the new Lyenn like? Depends on who you’re asking. His label calls it musical art, a masterpiece of jazz and avant-garde. His management is over the moon, especially because the record is finally here and the budget stayed within limits, almost – was it really necessary to go and record in Iceland?

For Fred Lyenn Jacques himself there could have been three records at once. An album based on his demos, dark, intimate, haunting, as if he’s whispering his songs into your ear while blindfolded. A second with electronic beats and organic percussion, wound-up and outspun – the dance version. And a third where a group records his songs in one take, in a studio setting but as good as live. The latter became Adrift.

Not three records but one. A most singular one. Because even though we love to watch Lyenn play bass in the Mark Lanegan Band or co-lead improv trio Dans Dans, it was about time he revealed the songs that were lurking inside him all those years.  At last we can go Adrift with him, follow his flow, experience the freedom of falling, we can let go and cling onto his sounds.

Is he pleased with the result? Of course not. He wasn’t pleased with his first record, although Marc Ribot joined him spontaneously and Mike Patton volunteered to release it. Neither with his second and third record. But that shouldn’t keep us from cherishing them as little juwels that defy time and style.

Same goes for Adrift: you don’t always know what you’re hearing. There’s a bit of the timid singer-songwriter, a multilingual Jeff Buckley at the piano or a Nick Drake on bouzouki. Miniature landscapes appear out of the mist, reminiscent of late Talk Talk or Mark Hollis’ solo work. Lyenn’s pop music is as refined as that of David Sylvian, even when at times it consists of just two notes. ‘Give In’ could have been a Radiohead idea – the moment he becomes aware of that, he cuts it off. ‘Staggering Heights’ is precisely that, dizzying. And the 8 hypnotizing minutes of ‘Hissing Fire’ should have been 80 minutes. A mantra.

Adrift is the life of Fred Lyenn Jacques on record, with all his names and voices. The five year old submerged by Frank Sinatra in a carpet sea. Playing with Dorothée on bongos. The great-grandson of a classical pianist, friends with Eugène Ysaÿe and his violin. Touched by the strings of the harp, his first instrument. At boarding school with George Michael and Sonic Youth. Going from jazz class to academy, to jamming with Ornette Coleman in his New York appartment.

Lyenn lives and outlives. He slept in a basement studio in Lower East, in the shell of his double bass, while his mother struggled with cancer. Over eight years now he’s been touring with Mark Lanegan, the moodswing king. He goes deep when he knows he can get away, he gets intimate with strangers, he prefers to record in Iceland because he has no history there.

And no reputation. Because he also is an exacting artist, an aristocrat who craves quality and therefore demands time, and more budget. He receives international praise, and according to some Belgian colleagues too much attention from the press.

That too is debatable, dependent on who you’re asking.

As we know him: Lyenn is a seeker. Never and always confident about himself. A basso continuo with a falsetto. He improvises a path where there is none. On the way he picks up instruments and follows his intuition. He gives himself to the music and in turn passes the music on to us. By far too infrequently and with a lot of patience and luck in the form of a record. One like Adrift, and like nothing else.